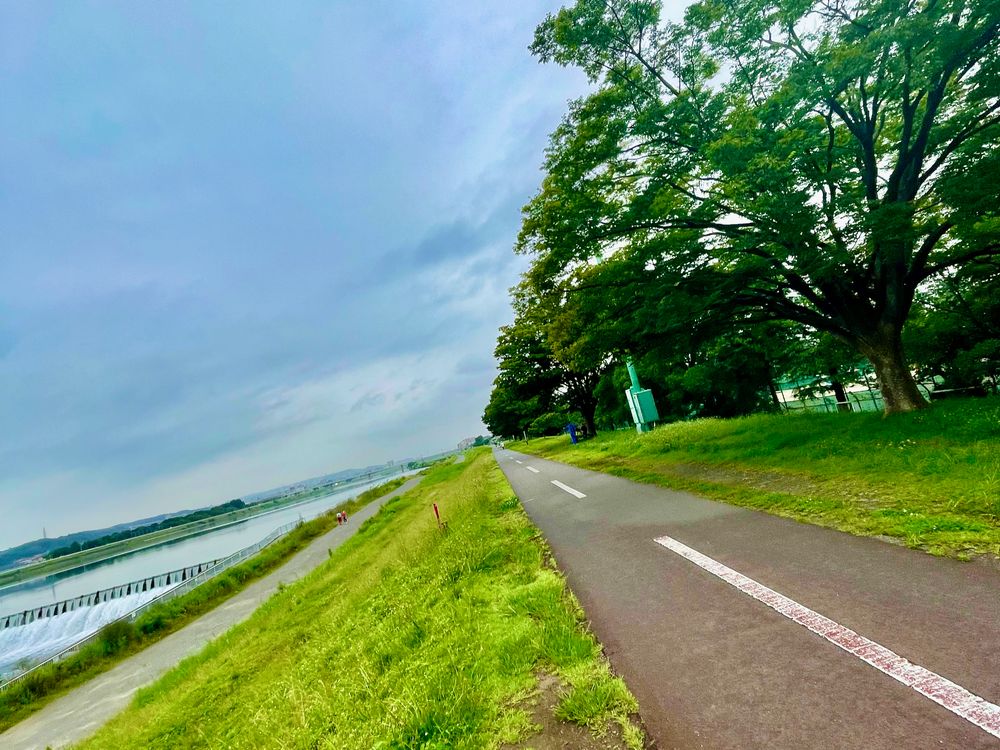 Last night was another late work day, with meetings running through 11:30pm. Regardless of the hour I laid my head on the pillow, I was intent to ride in the morning, weather permitting. When I arose from a deep slumber at 4am, the first thing I did was peep outside. Lo and behold, no rain! Today, unlike yesterday, I would have an opportunity to hit the tarmac and log some kilometers.

Once I recognized there currently was no precipitation, I immediately launched into my pre-cycling ritual. After getting dressed, I strolled upstairs to hang with the pups and grab a quick bite of energy.

In preparation for a potential ride, I threw some rolled oats, raisins, fits, almond mild, and a hint of maple syrup together in a bowl, and stored this in the refrigerator overnight. This morning I merely added a small dollop of apricot jam to the mixture. I rapidly consumed this healthy energy mix, and drank 750ml water to hydrate. There will be no bonking today.

At approximately 4:55am I walked out the front door to prep Red Chameleon for some action. As I descended the outer stairs, the thick and wet air was immediately noticeable. Pretty much everything was wet even though there were no signs of rain. I quickly ignored the wetness, motivated to get out riding as quick as possible. My energy level was at maximum this morning, and I did not want to waste this opportunity.

I was determined to ride today, no matter what.

Red Chameleon was galvanized. Her tires were pumped with fresh air after a quick wipe down, and while mounting her I could feel the power she was ready to wield. At approximately 5:05am we rolled out, heading towards the Tamagawa where we normally start most rides, prepared to do a full 50k. I needed to log the kilometers, so there would be no giving up and turning around at the 18k mark.

Surprisingly, even with an astounding lack of sleep, I was amazingly capable this morning. Somehow I had a ton of energy and was pumping power through the pedals as I rode upstream towards the fabled 25k turnaround spot. My endurance level was also strikingly increased compared to previous days.

In many instances during the first half of the ride, it felt like riding Red Chameleon was effortless. I recall looking down at my Wahoo to check cadence and speed, only to be surprised to see I was riding upwards of 32kmh in sections I am normally only hitting 27kmh. At the time it did not feel like I was moving that fast.

The overall stats for the entire ride were equally surprising. Today was my fastest 50k on this route, a route I have taken a total of 32 times throughout the last 15 months. I destroyed my previous record of 1:49:56 by over three minutes, logging a 1:46:54.

Not only that; my average riding speed was 28.4kmh, the fastest I have maintained over this distance. I also managed to hit my desired cadence of 90rpm for the entire 50k while also averaging 171 watts.

These stats could not make me any happier. At the same time, I am earnestly baffled how I pulled this off after such a major lack of rest. Colour me confused.

At this stage you may be wondering why I opted to call this tormenting Thursday tarmac travels. Quite simply, 25k of the 50k was completed in varying states of rain. There was a noticeably annoying sprinkling of rain for the last 10k of the upstream ride. It was not enough to prevent me from riding, but aggravating enough because my sunglasses were rain covered, inhibiting my visibility.

The rain continued even as I hit my halfway point, not increasing in intensity at first. After quickly ingesting a coffee and honey flavored energy gel pack, as I was about to make the trek back towards home, Mother Nature unleashed substantially more fury. I immediately jumped on Red Chameleon to try and escape her wrath.

For the next 15k I had to endure fairly heavy rain along the Tamagawa. My visibility was severely limited, but I made damn certain to pay strict attention to the path. There were a number of people walking, running, and riding along the Tamagawa Cycling Road. It was imperative to be cautious because braking could be dangerous if I needed to rock rapid evasive countermeasures. Thankfully the entire return ride was completely uneventful.

I rode through treachery for 15k of the 25k return ride before the rain eventually ceased. It was perfect timing because it just so happened to stop near one of my normal picture pause points. I took this opportunity to snap a few photos, wipe my sunglasses dry, and down some electrolyte drink before hitting the road for the remaining 10k.

Even with the irritating irrigation, the ride was a lot of fun. I normally do not enjoy cycling in wet weather but today was fine.

It felt great to be out riding this morning. I remain surprised and dumbfounded with todays performance. I will need to dig into this, do a bit of research, and better understand why I could perform at such a high level after considerable lack of sleep and even fasting through dinner.

In three rides this week I have hit 150k of my 180k goal, with three days raining. I suspect at least one of the next three days the weather will cooperate enough to allow me to hit the tarmac. Assuming I can get that one additional day, the current plan is to rock out another 50k. What would really be awesome is being able to ride for the next three days, logging another 150k for 300k total in one week.

Will it happen? We shall see if Mother Nature allows me to ride. No matter what, keep kicking ass and never give up.