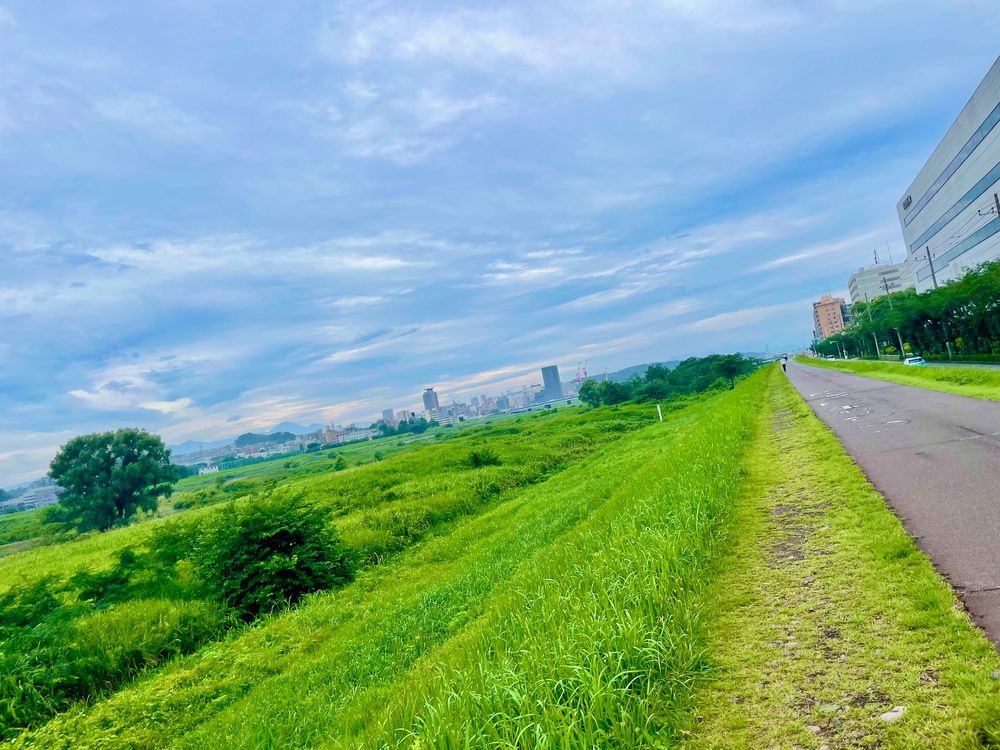 Prior to knocking off for the night I briefly checked the weather report and saw a few meteorologist proclamations of very little expectation for rain in the morning. I quickly prepared my electrolyte bottles and then drifted off to sleep, dreaming about cycling. As luck would have it, when I awoke at 4:15am there was no rain and the weather was a balmy 20c. I was finally going to be allowed to cycle for two consecutive days in a row after Mother Nature had denied me this pleasure for so long.

Once I was fully awake, I felt immediately motivated. As I was doing my pre-cycling ritual, I was anticipating power peddling along the Tamagawa. But as soon as I walked out of the door this morning, I was smacked in the face, feeling as if I were wading through nacho cheese ready to drench a bowl of tortilla chips. The air was so thick with moisture it was almost hard to breath. Thankfully the temperature was mild because some balance was going to be vital in succesfully completing this ride.

Although I was excited to be out riding, I was a bit concerned with my ability to sustain a decent pace and maintain endurance today. I was keenly aware the recent forced retreat had a negative affect on my fitness. My legs were still feeling a bit sore after my riding re-emergence yesterday, thanks to what essentially amounted to five days off the tarmac.

As destiny would have it, I felt pretty damn sluggish today. I had a tough time maintaining my desired cadence and pace, and my legs felt like jello, tiring out far more quickly than I assumed. It is okay to take a couple days break on my own volition because I can prepare myself for the inevitable return. Being forced to stay indoors is a completely different story.

I was enjoying the ride even though it hurt. During the entire upstream leg I was constantly telling myself to complete the full metric half century. However, as I was approaching a bridge I need to cross to get to the Tokyo side of the Tamagawa, my mind started trying to play tricks on me. This is a spot where I generally turn back downstream on my almost-40k rides. The little dastardly devil on my shoulder decided to deceive me, trying to convince me it was unnecessary to do the 50k, and a mere 38k would be sufficient given todays air conditions.

I raised the bullshit flag on Mr. Devil and told him to piss off. It is times like these when mental fortitude is a necessity. You need to be able to brush the lunacy aside and finish what you started. By completing your intended goal you will feel a far deeper sense of accomplishment than if you were to give in to that little bastard telling lies from your shoulder.

Never give up unless it is life threatening or health endagering. Bonking is dangerous, so if you get to a point where you are about to bonk you need to immediately stop riding otherwise you risk bodily harm.

As I rounded the corner where I would need to double back towards the 25k mark of the full the 50k - only a mere 7k to go - instead of going straight and heading home, I cycled towards the end of the first 25k. I beat that little devil to a pulp, destroying his confidence. His ability to convince me of such stupidity took a major hit this morning.

I was sure glad I made this decision, not the least of which is knowing I achieved my daily goal. As I pedalled up about 1.5k from the double-back, I was treated to a pretty decent view of Mt Fuji. Considering the thick humidity and clouds coating the Tokyo sky, I had no expectation to be able to see our famous neighbor. But there she was, sitting right below some overcast, not clear nor snow capped, but visibile enough to provide some added motivation.

The return trip proved to be a lot more fun. While I was not able to maintain the cadence and pace I intended, I was riding noticeably faster. The air was still thick like a pool of pasta sauce, but the temperature and breeze made for a really comfortable ride home. Most important, it felt great to be out on the tarmac for the second day in a row. I was having fun, and that is just as important as the fitness.

The weather forecast for Wednesday is currently saying rain, although with a break at 4am, followed by a 20% chance throughout the early morning when I normally ride. Whether or not that holds remains to be seen. Hopefully I will be able to get Red Chameleon back out again tomorrow.

I need to log as many kilometers as possible this week. Monday through Wednesday next week I am going camping, and will be unable to ride. The plan is to be completely unplugged from the grid for a few days of much needed rest and relaxation away from the confines of work-from-home.

What is just as important is the opportunity to redeem myself, getting that average speed closer to the 28kmh mark and my cadence back to at least 90. I need to work harder, pushing myself closer to the limit of my old ass body. There is no reason I cannot get consistently faster. All it takes is hard work and dedication.

It is now time to go hit the shower to cool down, and then grab a bite to eat for breakfast before starting my work day. I feel thoroughly alive this morning and am happy I knocked out two 50k rides in as many days.