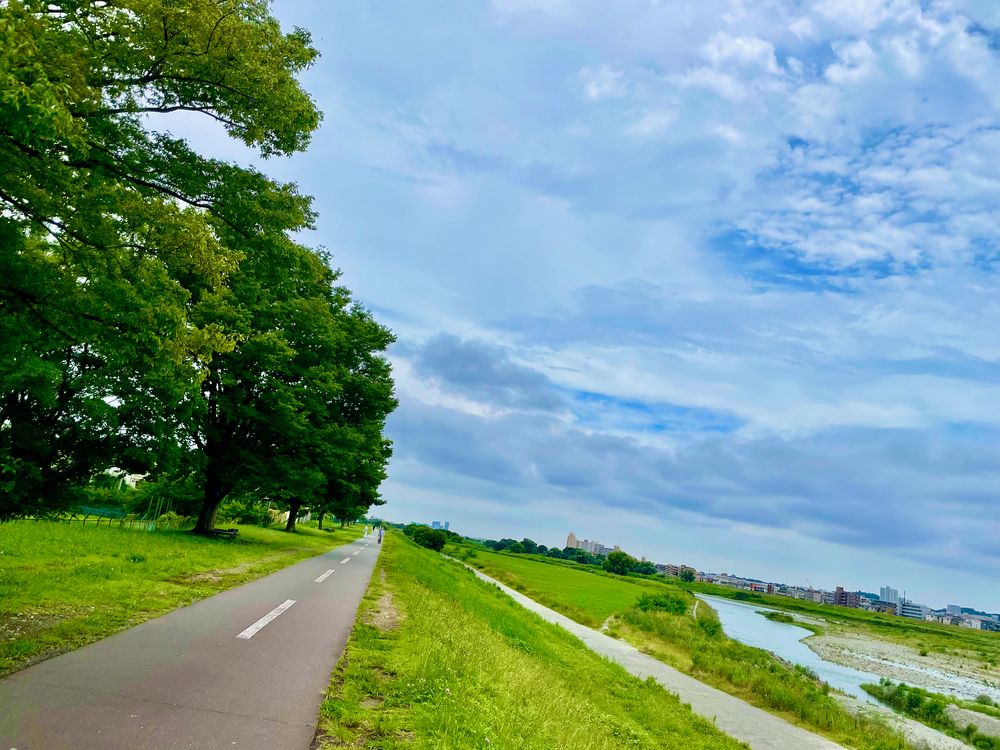 I awoke this morning at the crack-of-dawn at 4am like usual, scrambling out of bed and anticipating the weather forecast to be wrong. While still wiping the sleep from my weary eyes, I strolled into my office and peered out the window. It was still pitch black, but with a thick cloud cover and what appeared to be a light drizzle. Was today the day I would finally be able to take Red Chameleon out for one of those fabled 50k rides?

I thought to myself, a little light sprinkle never hurt anyone, especially after not having been out riding for four days straight. So I turned around and started the morning pre-ride ritual, generally consisting of brushing my teeth, getting dressed into my cycling gear, and grabbing a quick bowl of oats and 750ml of water. As I walked out of the bathroom to fetch my clothes, I noticed the rain had kicked it up a notch. My hopes of riding early were dashed by yet more Tokyo precipitation.

Now being wide awake, all was not lost so I took this opportunity to get some work done. I did a few things on the site, did some actual work, and read a myriad of news articles. Before heading upstairs to grab a bite to eat I quickly peeped out the weather forecast for today. Ostensibly there would be an opportunity to ride in the mid to late afternoon, if you believe the weather guessers powering the various weather related web sites. Maybe not all was necessarily lost.

Around 10:00am the rain ceased, and the sun and blue sky started to sneak through the overcast. I recognized this break in the rain as my potential one and only opening to hit the tarmac today.

Without wasting a second, I promptly changed into my cycling clothes, and ran upstairs to hydrate and eat a few khenaizi dates for a boost of pre-cycling energy. At about 11:00am I was finally on the road for the first time in far too long. As I was pumping away on those pedals, I heard my quads and other leg muscles screaming at me in anger for waiting this long to give them some much needed love and attention.

Most of the ride was completed under an evil looking cloud cover, as if Mother Nature was toying with me and about to unleash those wet warriors upon me at any second. Thankfully, she was far too kind today, lifting up her skirt ever so slightly to periodically reveal a bright blue sky. The clouds were moving fast thanks to the wind, so these times were short and quick. The weather today was teetering on the brink of all out nuclear war.

The temperature was mild enough to be comfortable, yet the humidity more than made up for it to feel almost oven-like. It was nowhere near as bad as it has been, and that was fine because I was able to pound out a lovely 50k ride in decent time. Although I had been off Red Chameleon for four consecutive days, she performed flawlessly. My legs were not too bad either, not hurting nearly as much as I expected. I suspect this was far more mental than physical, because I was determined to ride, and damn certain to enjoy it while I had the chance.

The first leg of todays ride was a short yet fast 8k downstream stretch before turning around for a very long series of upstream segments. The first 10k of the upstream leg was fraught with wind, considerably slowing my pace. I parried valiantly, not allowing Mother Nature to get the upper hand. My legs rarely tired on me today even after so much time off the bike.

When I finally reached the 30k-ish mark, where I would ultimately turn around and head back downstream, I was feeling super pumped. The first 10k towards home is probably my favorite stretch of the course, barring no major traffic jams, which are usually non-existent due to the location. I was flying, essentially averaging 32kph for a 5k segment.

The remainder of the ride was essentially business as usual. It was a comfortable series of segments, and not really all that busy with walkers, runners, and other cyclists. This was likely because of the time of day and the recent rain, so most people opted to just stay indoors for fear of a sudden downpour.

Overall, I am very happy with todays performance, especially given the amount of time off. Comparing todays 50k route to the previous times I rode it, which is not many times, I had my best time ever today. I find that rather intriguing for many reasons, not the least of which is time off and the amount of wind. Maybe I am just actually getting better but not really capable of consciously noticing my own progress. Since I am paying strict attention to ride stats, I am getting better at evaluating myself after-the-fact.

While editing a couple pictures, rain slowly started to sprinkle from above. In fact, not ten minutes after I went inside the house the rain was pounding the pavement in anger, as if it was trying to enact retribution because I had been out riding. Talk about lucky timing.

According to the weather forecast, I should be able to ride again tomorrow morning. I fully expect to rise from the dead at 4am and be on the streets around 5am. Hopefully Mother Nature does not get in my way.