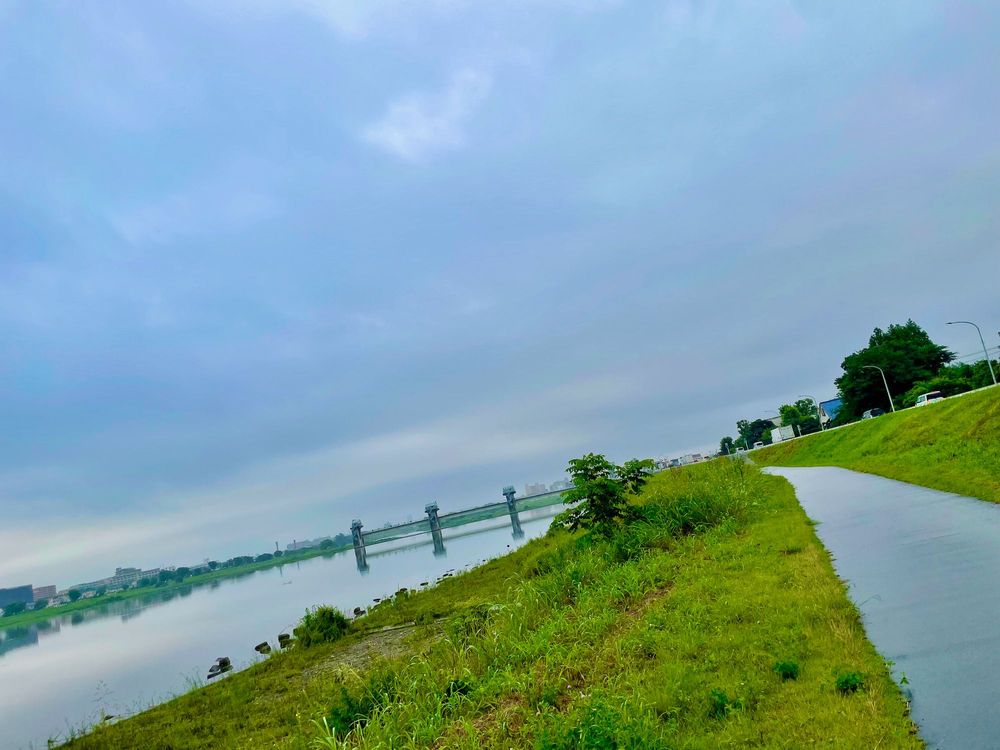 Prior to passing out in front of the television last night I quickly checked the weather forecast. According to Japan's premier site, the outlook was very middle of the road: 40% chance of rain right when I want to ride. Generally this means it will not rain, but you never know what mood Mother Nature will have on any given day. Unfortunately she was feeling pissy this morning, and decided to heave buckets of rain on Red Chameleon and I for our first ride since Saturday morning.

Since I had not cycled for four consecutive days, my intention was to ride a metric half century. It was funny, while camping for the past three days I was really looking forward to getting back on the tarmac for a nice ride, and was hoping I could do a complete 50k this morning. When I walked out of the house at 5am this morning the southern sky was blue as the ocean, with minimal cloud cover. From all appearances, this was going to be a wonderful day.

As usual, I completed the pre-ride Red Chameleon maintenance before hopping on the saddle and taking off towards my first checkpoint. This first stop is roughly 6km from home, and the where I start taking pictures every ride. As seen in the first picture in the above gallery, a sudden layer of clouds appeared towards the south, although the sun was shining through this thin blanket. There was even a hint of blue in the sky.

When shooting this daily shot, I usually have Red Chameleon pointing north. My right foot is unclipped from the pedal while my left remains secure. I turn my torso about 100 degrees to the right to take that picture. Once I finished snapping the photo, I turned back to face forward, looking due north. This is when I got that tingly sensation of dread. There were thick clouds ahead, leaving me feeling substantially uncertain about the remaining 40k+ of today's ride.

I swiftly left the first checkpoint, heading upstream towards the second checkpoint at the 12k mark. My legs felt fine even though I had been off the bike for far too long. My cadence was decent, my speed where it should be, and I was pedaling with just the right amount of power. Approximately 5 minutes into this next leg I ran into some light rain. Although wet, it was nothing like the nonsense I encountered last week. At least not yet.

As I continued upstream the rain did not relent. Mother Nature was intent on crushing my soul this morning, throwing more soggy soldiers than I can handle. When I hit the 15k mark I realized it had been raining so hard, and I had ridden through so many large puddles, my socks were now drenched and my clothes were covered in mud. I was a literal shit show.

At the 18k mark I was done. Normally I would keep riding, but the downpour was just too strong. Riding was just not fun. So with that I crossed the bridge, and hung a right-turn to head back downstream towards home. Instead of doing a full 50k I instead stuck with a standard 18k.

It was nice to be out on the tarmac after such a long break. I really needed to get out there and burn some calories, sweat out some stress, and immerse myself in some nature before being stuck online for 15 hours.

Now that rainy season is ostensibly official over in Tokyo, hopefully Friday will offer a more exciting and fun ride.