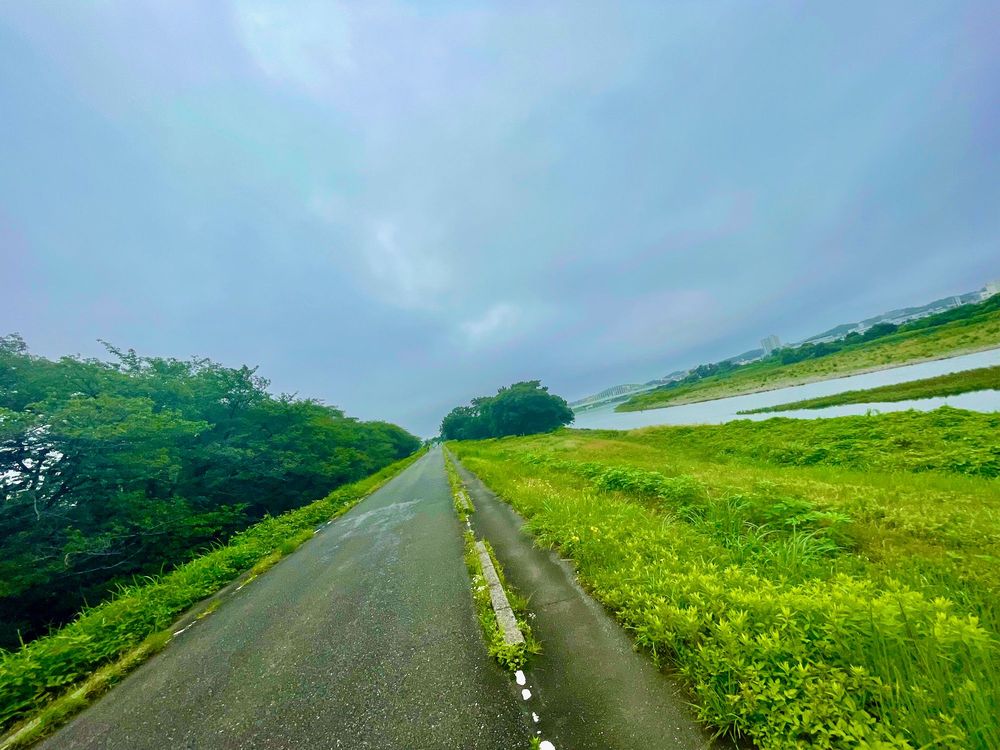 Some days when arising from the near dead at 4am it is instantly obvious I am feeling it. Other days, I feel ambivalent. Then there are days like this morning where I was not feeling it. At. All. Although not in the mood, I pushed myself to crawl out of bed, change into my cycling costume, and hit the road for some required exercise. It was vital to get out and ride despite the meager motivation meter. So with that, I walked out of the door at the usual 5am mark to mount Red Chameleon for some stimulating Saturday spinning.

As I departed, the humidity smacked me directly in the face like two Sumo wrestlers swatting their ginormous hands at each other in the midst of a heated battle in the middle of a dohyō. The air was thick, sweat immediately forming as I walked down the steps towards the garage. It was so muggy I could feel the moisture miraculously materializing, surrounding and suffocating my entire being. It felt like I was wading through clam chowder, not riding a bike along the river.

Feeling substantially less excited about riding thank to the heavy humidity, I nevertheless jumped on Red Chameleon and rode off towards the Tamagawa. The first two kilometers was uneventful, but as I was spinning I still was not really feeling it. In spite of the lackluster drive, I put my head down, and rode on towards my first goal near Futako-Tamagawa.

This very quick break facilitates two very simple functions. First and foremost, I always take the first picture of the ride for this route at this location. Secondly, yet less important, is to turn on whatever podcast or audiobook I am currently consuming. Unless there is immediate danger, this is strictly a no drinking stop. That is just one of my personal unwritten rules of my rides.

Listening to something educational and interesting is a key component of my cycling strategy. This is an aspect of my riding I have yet to discuss but intend to write about in more detail at some point.

The last two months I was listening to a couple very good audiobooks. The first was Sandworm by Andy Greenberg, with the second being American Kingpin: The Epic Hunt for the Criminal Mastermind Behind the Silk Road by Nick Bilton.

The latter read more like a movie, and was an interesting foray into the entire Silk Road history - not the ancient trade route linking the west with the Middle East and Asia. Instead, it was focused on the black market dark web site where anyone could buy literally anything, but primarily focused on selling drugs online.

On the other hand, Sandworm is an in-depth story about the Russia perpetrated cyber attacks against the Ukrainian power grid in 2015 and 2016. If you have any interest in the cyber attacks carried out by nation state actors, Sandworm discusses many of the well known, and not-so widely talked about attacks throughout history. Both of these books were fascinating reads.

The last few weeks I have taken a break from audiobooks and started to catch-up on some of my favorite podcasts and others I had in my queue but did not yet dive into. I recently started, and am now nearing the end of Monster: DC Sniper, a true crime podcast going into exquisite detail about the horrific sniper attacks occuring in the Beltway in autumn 2002. I am on episode 13 of 15, and this has been a fascinating listen, getting more details behind these nonsensical, random assaults. I love true crime, and peering into the psychology of these attacks, and how law enforcement ultimately brought them down has been captivating.

In case there is any concern, no - I absolutely do not use headphones of any sort when riding. It is imperative to be able to hear my surroundings and all ambient noise. Safety first.

Instead, I use the Bose Soundwear, wrapping it around my lower neck while it rests on my shoulders. It is perfect for listening to audiobooks and podcasts. The volume is just enough for me to hear without bothering others who are trying to enjoy nature. The device is also very stable, never once falling off in the 14 months I have been riding with it. More on that in a different article.

Back to the regularly scheduled program

I kicked Red Chameleon into gear, and resumed the upstream journey. As I rode towards my next landmark, the thick humid atmosphere was utterly demotivating. It was strikingly uncomfortable to ride in this weather, but I was intent on achieving todays goal. Rather than taking long, deep breaths of the normally intoxicating morning river air, I focused on hitting various personal milestones along the ride while being consumed by that aforementioned fascinating podcast.

Today was absolutely a put your head down and focus kind of day. The only way I was going to complete this ride was through sheer force of will.

I hit the 10k landmark while waiting for a red light to turn green, followed by the 13k stopping point for the second set of pictures and some electrolytes. Next up is the 18k crossing bridge, before doubling-back towards the 25k break spot. At the halfway mark I downed a gel pack for some additional energy, hoping this would electrify me for the 25k return home.

The downstream ride went by a whole lot faster than the upstream leg. While the air was still thick like Japanese curry, it was substantially easier to ride. Maybe this was all psychological, maybe I was riding slightly faster, or maybe I have lost a marble or three. Nevertheless, I felt like the return was vastly easier, not once thinking I needed to stop because I was feeling uncomfortable or running out of gas.

Having said that, comparatively, today's ride stats were horrendous. Although I managed to eke out two personal records - one for an 8.4km segment and another for a 1km segment - my overall performance was not where it should be. While still head and shoulders above where I was months ago, this was near the bottom of rides across the last three months. It was a mere two days ago when I thoroughly destroyed this route, logging my best speed and time for this 50k, but apparently I used up all remaining quota on the single morning.

When i pulled up in front of my house, I was unusually saturated in sweat thanks to the slippery and soppy morning air. Relieved to have returned home and pushed through the utter lack of motivation, I was thoroughly and extraordinarily exhausted. My entire body did not want to cooperate, slowly returning Red Chameleon to her stable before heading inside for a hot and calming shower. The recent lack of sleep coupled with the evil conditions outside caught up with me.

Once I finished a nice breakfast I headed over to the couch, laid down, and promptly passed out for a much needed two-plus hour pause. The most important lesson from today is to never give up. Push yourself when your inner devil is trying to convince you otherwise.

As long as there is no risk of physical danger, it is much better to continue and achieve your goal rather than turnaround and head home. Without fail, when I have allowed that dastardly little devil to influence me to do what I otherwise already knew I should not, I have been nothing short of disappointed.

Even though the ride today mostly sucked, I am pleased I pumped out the full 50k I intended to complete. That 50k was the goal. By finishing what I started, not only am I satisfied, but I also hit my 180k weekly goal for the first time in three weeks. I could not be any happier I stuck with it, pushed through the madness, and strengthened my resolve.

You can, and will, do the same.