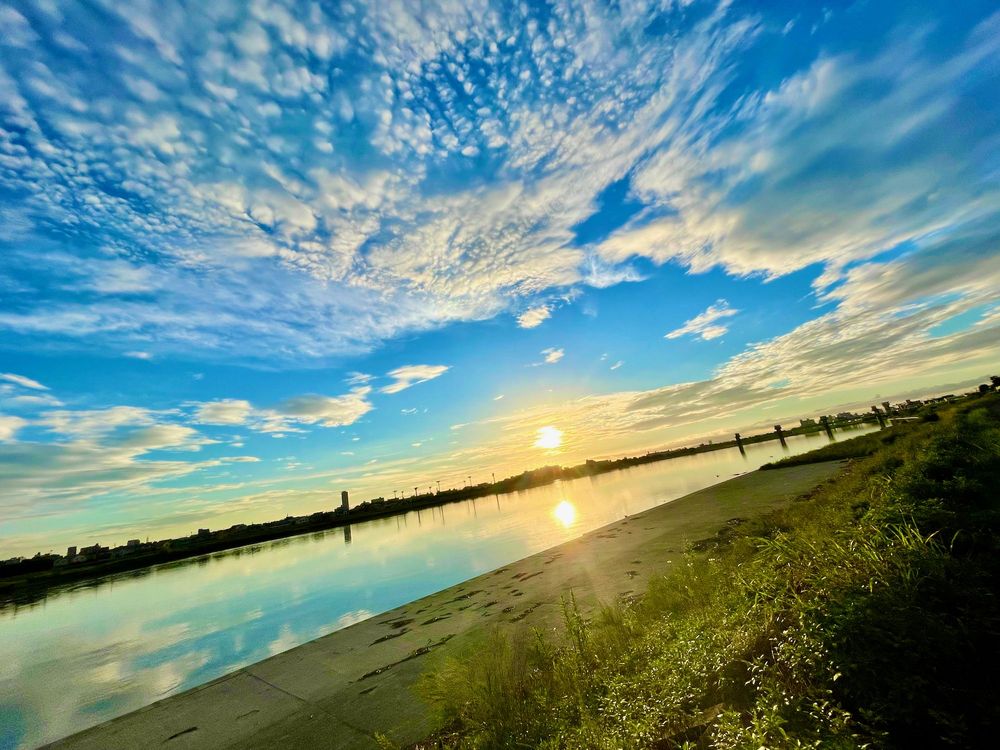 Thursday I was utterly exhausted after two consecutive days of little sleep combined with an extremely busy schedule. The beautiful ride that morning did not improve my weary state, so I opted to hit the sheets early and sleep late, taking an impromptu recovery day. This morning I was poised to ride at all costs, and after a good nights rest I hopped on Red Chameleon for another lovely dawn ride.

I made sure to finish up work fairly early on Friday so I could get a decent amount of sleep. Since the earlier part of the day was busy, I ended up eating a combined late lunch, early dinner before finishing up work. Then around 8pm I laid down on the couch and promptly passed out while watching a movie. At around 11pm I hit the real sheets, getting somewhere above seven but below eight hours of sleep.

My body and constitution were top notch this morning when I awoke at 4am. I completed the normal pre-ride ritual, wasting some time cleaning up a few puppy accidents. Otherwise, I was out of the house at 4:45 and riding towards the river about ten minutes later.

While Thursday morning was utterly stunning, especially the beautifully huge rainbow, this morning was not substantially different. The temperature was a crisp 25c without any wind, and the humidity was not as bad as it had been in recent weeks. The climate does seem to be tempering itself lately, making for far more comfortable morning rides, especially when leaving around 5am.

Today, like the other day, I opted to take a slightly different route towards the bridge I use to cross the Tamagawa. Although I usually take it fairly easy for the first 5-6k, my speed this morning was substantially higher than normal for this initial segment. I was averaging roughly 29kph, approximately 2-3kph higher than normal. This was not due to me pushing myself. I was riding leisurely, and suspect the extra rest had my body in a substantially better state than Thursday.

Leaving this early in the morning, especially as summer inches towards autumn, means catching a glimpse of a stunning sunrise. When the sky is, more or less, cloud free Mother Nature is often times nice enough to give a pleasing peek as the sun peers above the horizon.

One of these days I would like to ride with a simple tripod, place my phone on it, and take a 15-20 minute timelapse of the sun as he ascends towards the clouds. That would be a lot of fun.

The upstream ride was mostly uneventful. There was a narrow section where I got stuck behind some dude on a cross-bike. He was wearing headphones, arms flailing to the music blasting into his ears. While this was likely a lot of fun from his perspective, it was pretty damn annoying.

The cycling road has a lot of cyclists, runners, and old folks going for morning walks. Having spatial awareness is paramaount in ensuring either you do not get hurt, nor do you inadvertently hurt someone because of your own stupidity. In short, pay attention!

The second I was able to pass him, I flew on by and never had to deal with him for the rest of the ride. The remaining 15k since passing cross-bike arm flailer dude was just plain fun pedaling while listening to season two of one of my favorite true crime podcasts: In the Dark. These fascinating stories really take my mind off the pain from the ride, but I do wonder how distracting this is from focusing on meeting certain cycling-specific goals. Nevertheless, I do enjoy the podcasts and find them refreshing to listen to while riding.

I stopped for a nice short break at the 25k turnaround spot, hydrating with some electrolytes and eating an energy gel pack. While pausing for a few short minutes, I watched as an older male cyclist was hitting on what appeared to be a younger female cyclist and her mother. It was amusing to watch this sixty-something dude work whatever ostensible magic he was trying to pull on the forty-something lady and the older woman I assume is her mother.

But I had enough of this show, and decided to head home. Despite it only being 6am, the temperature was rapidly increasing, and I also needed to get home so I could dispose of two weeks worth of cardboard boxes. We only have one opportunity per week to throw away this type of trash, and it just so happens to be Saturday mornings.

The first 5k of the ride back were basically uneventful. At some point, and I cannot recall exactly when, I realized I was unable to downshift. There was an incline I wanted to make easier to climb, yet no amount of tapping the electronic shifting pedals changed gears. This was a semi oh-shit moment. But it was not too bad because I was in a gear roughly in the middle of the rear cog.

I decided to stop, hop off Red Chameleon, and try to determine what was going on. Not noticing anything immediate, I switched the battery from the front derailleur with the rear, in hopes this would solve the problem. This did not work.

Theoretically, the front should be fully charged because I rarely, if ever, shift the chain on the foward cog. Somehow this idea did not solve the problem, and my fiddling with things seemed to have made matters worse, putting me in a higher gear requiring more power to move the bike.

I even opened up the SRAM Red eTap AXS iOS app to see if it could connect to either derailleur, and maybe tell me something. Alas, that was a pointless exercise that did nothing but waste time resulting in the inevitable. I was going to have to ride the remaining distance in this shit gear.

While the ride was painful, because getting moving required more power, it was actually not all that bad. I also learned an interesting lesson. Even though I was in this very difficult gear, once I got Red Chameleon moving she was maintained speed quite a bit easier. While my cadence dropped into the high 70's or low 80's, my speed hovered around 32kph for the majority of the trip.

I find this utterly fascinating. When I have full control over shifting there are times when I struggle to sustain 30kph. Yet this morning I had no control - effectively I was riding a single speed bike - but somehow was hitting higher speeds than normal.

The rest of the ride back was uneventful if not somewhat painful. There is a lot of traffic on the return trip, often filled with far too many stop-and-go segments. This tougher gear made getting back to speed agonizing. When I did finally get home my legs were trashed. As I sit here writing this, my legs are in considerable pain and I contemplate taking a warm bath filled with epsom salt.

Ultimately, a good ride with two very valuable lessons learned, not the least of which is to ensure the derailleur batteries are charged otherwise shifting will not be a thing. I guess this happens at least once to anyone who is new to electronic shifting. I have been officially indoctrinated into the club.

Since it is a beautiful Saturday, I need to get the car a nice scrubbing. She is super dirty from when we went camping and requires some tender loving care. I may also construct a bicycle rack for the garage, assuming I have any semblance of motivation. At this point, my legs are screaming at me and all I want to do is rest and take a nap.

I sincerely hope everyone has an awesome weekend. Whatever you do, do not forget to take some time for yourself. Ensure you pay strict attention to your mental health. The new normal COVID-19 has brought to the world has had a lot of unintended consequences. We all must now be more congnizant of our well being than any time before in our lives.

Taking good care of yourself now will pay major dividends later on in life.

Be good. Peace out.