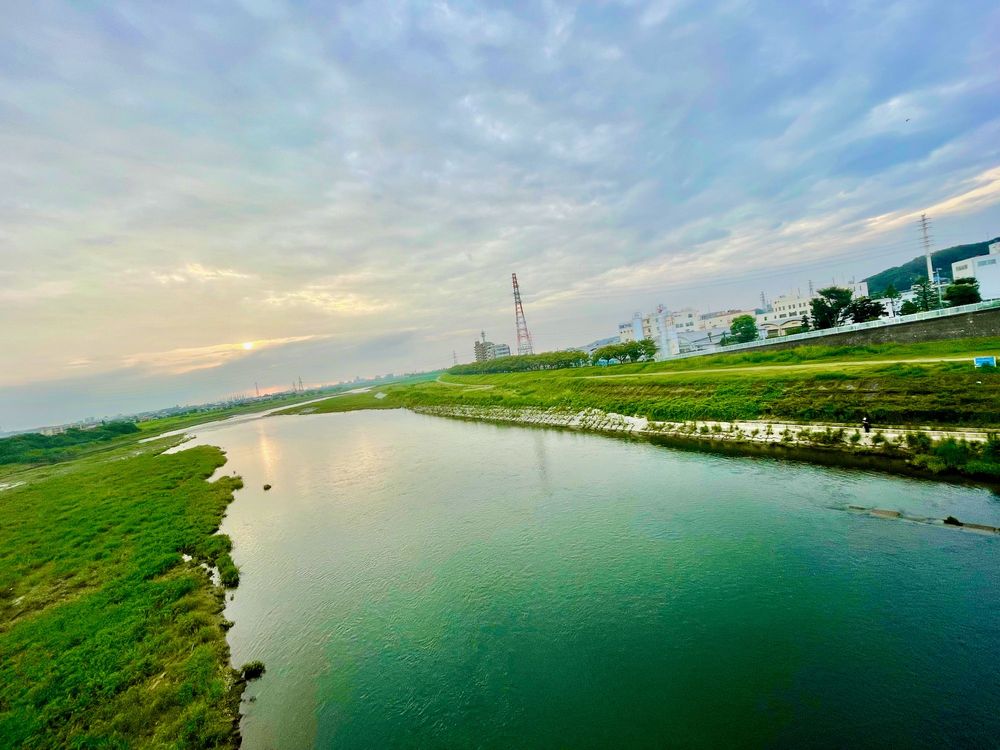 Despite being quite fatigued from Saturday's crazy ride, when I hit the sheets I aimed to ride Sunday morning. I was tossing and turning all night, my legs screaming in pain, upset I put them through hell earlier in the day. When I awoke at 4am I was drained and still hurting, so I opted to take a recovery day on Sunday. Nothing, except for maybe a major earthquake, was going to stop me from riding Monday morning. I made damn certain to hit the pavement this morning no matter what shape I was in.

I was rip roaring ready to rock-n-roll as I waltzed out of the front door at 4:45am. As I walked into the outside world, I was smacked directly in the face with extremely uncomfortable heat and humidity. I may as well have been walking through hot clam chowder!

It was noticeably warmer outside than in the house, and the air was thick and sticky, as if I had entered a sauna. The temperature was only 25c, not terribly different from Saturday morning, but it was warm enough for me to know today was not going to be fun. The sky was covered in dark and evil looking clouds. I was a bit concerned it may rain at some point during the ride.

But who cares? Gotta ride!

More or less, Red Chameleon and I headed directly for the Tamagawa. She was performing in tip top shape now that I had solved the electronic shifting issue from Saturday. I was able to smoothly shift up and down, with nary a problem in either direction, whether moving single or mutiple gears at a time.

Speaking of the headache I faced on Saturday, as it turns out the problem was not depleted batteries after all. The first thing I did after returning home was to start charging the batteries. Once they were fully charged, I put them on Red Chameleon yet she was still unable to shift. I was thoroughly perplexed.

SRAM eTap AXS is fully wireless, opting for bleeding edge technology compared to Shimano, which is still using cables in its electronic shifting components. The shifters need to be paired with both the front and rear derailleur to work. Like, to work at all. Otherwise, they are just high priced, do nothing buttons.

When I opened the SRAM AXS iOS app and connected to the rear derailleur, I noticed something I had not when I was out riding earlier. There were no shifters assigned to any actions. I needed to re-pair the shifters with both derailleur's, similar to pairing a bluetooth mouse with a computer. The question at this point was, how in the world do I accomplish this task? With a little Google-fu I had the answer.

As soon as I finished the re-pairing the shifters worked just as expected. I hopped on Red Chameleon and took her for a short ride, ensuring all shifting worked as expected. I noticed no remaining issues, and was relieved I solved this problem with relative ease. In fact, I kind of felt stupid for not having recognized this issue while I was out riding earlier in the day. It sure would have made for a better ride home.

There was nothing extraordinary about today's ride. The upstream and downstream legs were fairly standard. I did set a single personal record on one segment on the return, but otherwise it was just business as usual. I was mostly concerned with getting through the full 50k in this thick heat more than anything.

I did not really enjoy today's ride nor did I feel as if it was annoying or difficult. The ride was just a ride, and I attribute this primarily to the craptastic morning weather. If the climate was cooler or the sky brighter shades of blue, I would have had more fun.

My legs were still hurting a bit from Saturday and this was causing me to ride slower than desired. I was not struggling but at the same time I was unable to get decent continued pacing. Today was just an average ride with nothing remarkable to discuss.

Nevertheless, it did feel good to get a full 50k ride knocked out at the beginning of the week. There is no better way to start a work week than getting some good exercise on a Monday morning.

As I write this on Monday afternoon I fully intend to ride tomorrow morning. Not only do I want to ride, but also because Tuesday morning I will be receiving my second and final Pfizer COVID-19 vaccine jab.

I am fully expecting to be down for the count mid-week. Not only will I not be able to ride on Wednesday, it is not smart to be riding Thursday and Friday as well. So I need to log as many kilometers early in the week because I probably will not be riding until Saturday.

My legs still sting from Saturday. I am hopeful they will feel better tomorrow morning so I can sustain better overall performance across the entire ride. This means I likely need decent sleep tonight and just suck-up the pain, and push through any remnants tomorrow morning.

Tomorrow is going to be an interesting day. I sure hope there are no negative side effects from the second shot. My strategy is to hope for the best, prepare for the worst. Maybe tomorrow and Wednesday the puppers can take care of me for a change?