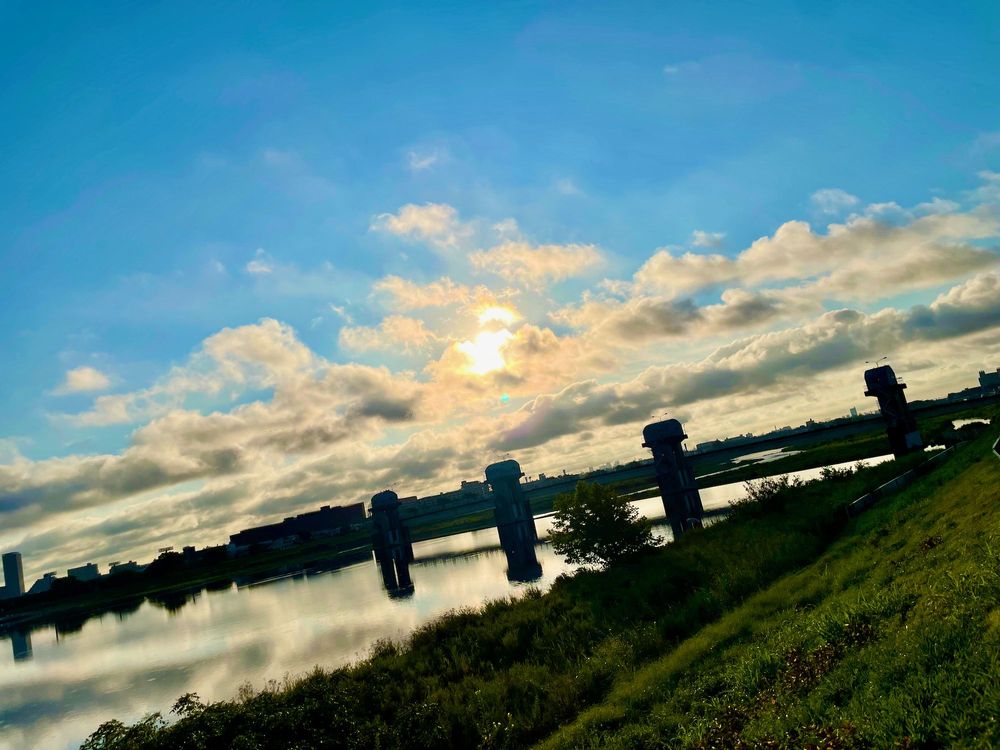 Last night I was pretty exhausted after two days of non-stop meetings. I laid down on the couch after my final meeting ended at 9:45, and promptly passed out surrounded by the three pup. I was determined to ride this morning, and had already prepped the necessities for the least amount of friction. Despite the torrid Thursday heat, today turned out to be a really fun ride.

Prior to walking out the door I ran into a bit of, shall we say, trouble. I was about to put on my cycling shoes at the front door when I heard some strange noises. When I looked down at the corner, I saw a little gecko running around. No matter what amount of wrangling I tried, I was unsuccessful in luring him out the front door towards freedom. He then mysteriously disappeared somewhere underneath the stairs. I was more interested in riding, and left him alone to his own devices. One of the pups, likely Mira, will find him and deal with him on her own terms.

What a peculiar morning pre-departure distraction. Speaking of digressions, allow me to briefly discuss my recent clothing upgrades.

I recently ordered a new set of cycling gear, primarily focusing on a more expensive yet higher quality chamois rather than the cheap Chinese knockoffs I had been using the last eighteen months. Instead of mere shorts, I actually picked out some really comfortable Rapha bib shorts. Although exceedingly pricey, everyone I spoke to about these, and everything I read online, pointed to them being far more pleasant for longer rides than the inexpensive kits.

In addition to the bib shorts, I also snatched up a base layer and a jersey, though I selected a smaller size than necessary. I now need to return those for a larger size, and then hope the next size up fits properly. Although I extoll the virtues of the lesser expensive gear, apparently spending more money on higher quality gear does lend credence to the you get what you pay for mantra. The bib shorts were very - shall I use the word hella? - comfortable throughout the entire 50k today. Never once did I feel any discomfort, a stark contrast to the other shorts I have been wearing.

Sporting my new purple bib shorts and my usual funky cheap Chinese knock-off jersey, I walked out the front door into oven-like heat. The temperature was already up to 25c with the humidity dialed up near the 80% mark. It was extremely uncomfortable, but welcome to Japanese summers. I have learned to properly hydrate and eat so that I limit the bonking risk, and am also wearing the right clothing for this whack ass weather.

I mounted Red Chameleon and off we went, comfortably cool breeze briskly brushing against my face as I slowly pedaled. Once I was moving, the discomfort from the heat rapidly disappeared as I forgot about it while paying attention to the road. The majority of the first 25k was uneventful if not hot, and with the wind offering a nice respite from the torrid temperature.

At no point during the first 25k did I ever consider turning back or giving up. I was hyper focused on doing a 50k today, and am very pleased I completed it as expected. I was substantially slower than I would have preferred, but that was primarily because of the headwinds I encountered.

I made my usual quick pauses to hydrate, and took a longer stop at the halfway mark, downing a coffee and honey flavored gel pack for good measure. It was not that I felt weak, this was more precautionary than anything. The humidity and heat causes me to burn more rapidly, and I did not want to wait until it was too late to take in some sugar. Once you pass that proverbial line, it is hard to rapidly recover. It is always best to stay ahead these problems.

After a 10-ish minute break, I hopped back on Red Chameleon and restarted todays podcast menu, pedaling like I was escaping a burning neighborhood. The return 25k seemed to fly by even faster than I was moving even though my pacing was still substantially slower than desired.

I would have preferred to be around the 28kph mark, but only managed 27.2kph. Similarly, I wanted to hit 90rpm but only managed 86rpm for the cadence average. The last few rides I have had some problems maintaining pace and need to dig into what the ostensible issue may be.

One thing I have noticed is I do need to make some minor adjustments to my seat position. In spite of having a professional fit, I did drop the seat slightly and that has made riding substantially more comfortable. However, the last two weeks my right hand is starting to get slightly numb during the rides. This happens whether I am on the tops or the hoods, likely indicating I need to move my seat forward. It is probably just a minor, almost micro modification needed, but one I should do quickly because riding with discomfort is not sustainable.

Interestingly - and I need to find a different word cause I use this one far too often - this only happens on the upstream leg. On the 25k return trip I never have this problem. So it is a weird one to diagnose. I need to speak with the Specialized bike shop staff and see what they have to say.

Nevertheless, today was a wonderful ride. I was dead ass tired when I got back home. Rather than wasting time, I quickly hopped in the shower, followed by eating a nice healthy breakfast. I then plopped down on the couch in the same position I was in last night, and promptly took a 90 minute nap.

That small breather was all I needed to get energized for the rest of the day. I am now ready to enjoy the long holiday weekend here in Japan.

Thus far I have clocked 100k of my 180k goal, and still have three free days to ride. Barring no unforeseen incidents, I should be able to easily surpass that 180k mark. My desire is to do at least three more 50k rides, bringing the total to 250k for the week. Maybe I can squeeze in some more kilometers and get closer to 300!