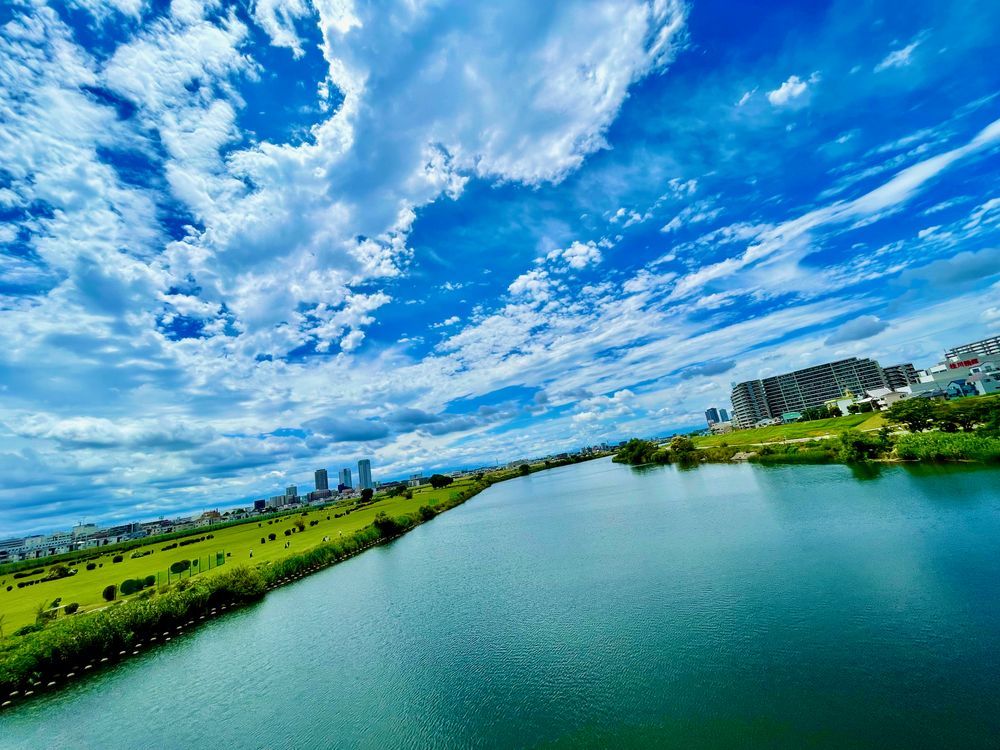 Well look at that! After all the crazy rain the last 36-ish hours, even all through this morning, a sudden turn of events has the sky blasting blue over the western side of Tokyo 23! Sometime around 11:30am to noon the sky turned a bright ocean shade of blue, and the rain stopped storming down upon the neighborhood. This was the chance I had been secretly waiting on, and as luck would have it, I now was faced with an opportunity to finally hit the streets!

I quickly changed from chilling-at-home wear to my superhero cycling gear, grabbed an energy gel pack, and a bottle of electrolyte laced water, hopped on Red Chameleon, and started pedaling. Immediately it felt like I was riding through beef stew, with thick humidity permeating the air, but at this point I did not really give a shit. The only thing I was thinking was, “woohoo, finally get to ride!”

My personal goal for today was to hit at least the 57k mark so I would achieve the 80k weekly goal. What I really wanted to do was bust out about 80k so I could get back on-track for a full 200k for the week. Unfortunately neither of those goals were in todays cards for various reasons.

Like all of Tokyo and Kawasaki living close to the Tamagawa, as soon as the sun broke through the cloud, everyone came out of the wood-works, like roaches scurrying about when unexpected light shines upon their lair. The huge amount of traffic along the cycling route made it exceedingly difficult to keep any semblance of pace. At one point I was stuck in a line of about 15 cyclists doing barely 10k because there were so many people littering the cycling road. Even when I could get some pace, there was always an obstacle in need of being properly navigated otherwise an accident would surely occur. Today’s average speed of 26kph and an 81rpm cadence average demonstrates just how horrible the conditions were for a decent ride.

Combine this major traffic jam with humidity you could slice like nice expensive cheese served with a glass of wine, and hitting both goals was just not in the cards. Not expecting the humidity to be as bad as it was, I only brought a single gel pack and single bottle of liquid along for the ride. I needed to stop and buy another drink because my energy and hydration levels were far too low, and that was not enough to get me back to where I would need to be to hit either the 57k or 80k marks.

Nevertheless, it was awesome to be able to get out and ride for a couple hours. I was able to pump out 51k, so it is not like all was lost you know? Riding along the river, enjoying the lovely skies and lush greenery lining the river was refreshing even in the humid air.

I now have to make up for this weeks lost kilometers next week, assuming the weather cooperates. Rainy season is so unpredictable so who knows how often I will be able to ride. When I do, I will be sure to maximize my time out there!
¯\_(ツ)_/¯