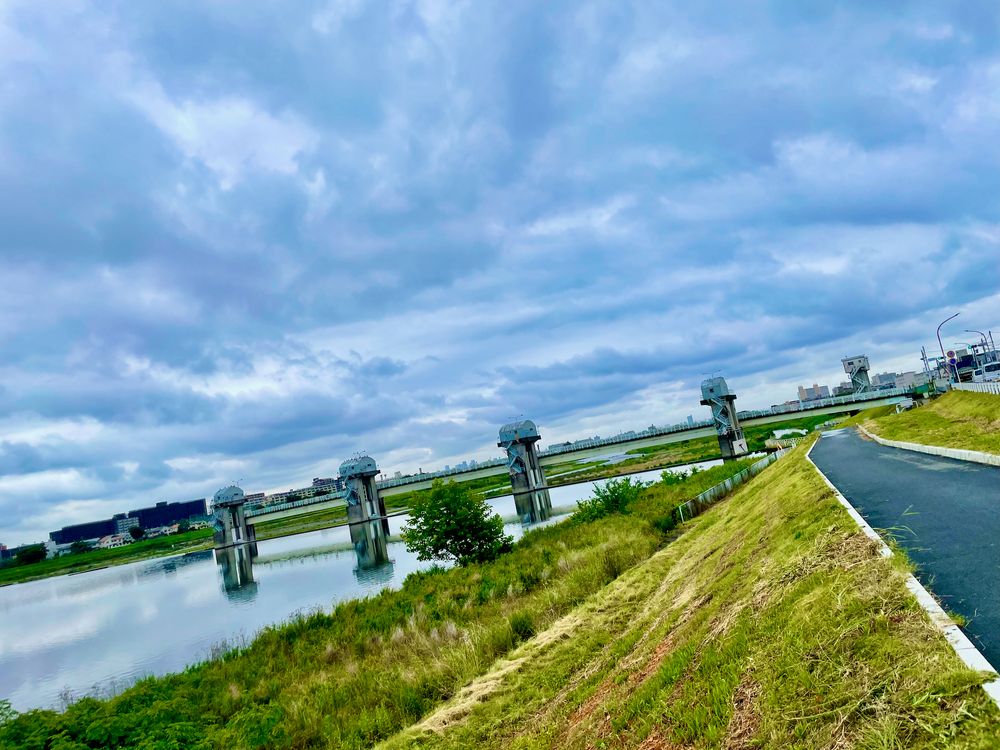 The post-rain weather today resulted in an exceptionally mild and exceedingly comfortable temperature this morning, almost to the point where I contemplated wearing a shirt with some sleeves. I quickly erased that nonsensical thought from my nonsensical brain and rushed out the door, only to find it was lightly drizzling. I walked down the steps to the street and pondered whether I should ride or just call it quits. The sky looked like hell was about to descend upon the city, so maybe a ride was not the wisest thing to do. But a wise man I am not, and I decided a ride, even a wet one, would be better than no ride at all.

No thanks to a peculiarly scheduled meeting running from 6:30-7:00am I had to settle for a late start. I rolled out of the house at 7:15am, right around the same time I usually return from my morning cycling adventures.

Last night was basically a nonstop torrential downpour until midnight. This morning there was a noticeable lack of sunshine, leaving little time for the roads and vegetation to dry, so the entire cycling course was blanketed with water. Both Red Chameleon and I got drenched when riding through nasty still rain water puddles, and light mud from the various gravel-only segments of today's 40k ride. There was water and mud everywhere on the bike and my clothes when I returned home.

Although I awoke not feeling as if I had a decent nights rest, I was able to maintain really good pace today. There were a few sections of the ride where I once again hit 37kph. I was consciously pushing myself to ride hard to ensure I stayed ahead of a pack of cars delicately trailing my behind. Even portions of the ride where I historically ride slower were above average today.

The main question on my mind: why? What is causing this sudden change in endurance and strength?

Peeping out the post-ride stats, I am pleasantly surprised to see I finally hit the 28kph speed average for the entire 40k course. Not one to complain, but I do wonder if the stats would have been higher had I not encountered so much vehicular traffic on the last five kilometers of the return ride. I did not expect so much congestion at this hour of the morning.

In fact, there was a two kilometer stretch where there were a long line of cars competing with older people slowly riding their bicycles, leaving a steady stream of vehicles crawling cautiously behind the cyclists. I got stuck near the rear of this nonsense, and lost substantial speed and cadence, likely affecting my overall ride statistics. Nevertheless, I am quite happy with how things turned out this morning.

My goal today was to complete a metric half century but I was only able to muster 40k due to limited cycling time. Were it not for that earlier meeting, I absolutely would have completed the full 50k course, and would have enjoyed every minute of it! Barring no weather treachery, tomorrow I am poised to ride a full 50k before returning and diving into the countless Thursday meetings on my calendar.

Here we are, half way through the week, almost to the longer holiday weekend. Even though I am in Tokyo, I am excited and looking forward to indulging in some nice American barbeque in honor of the Fourth of July celebration. I have some hamburgers, hot dogs, beef brisket, and all the requisite side dishes waiting to be devoured in celebratory revelry.