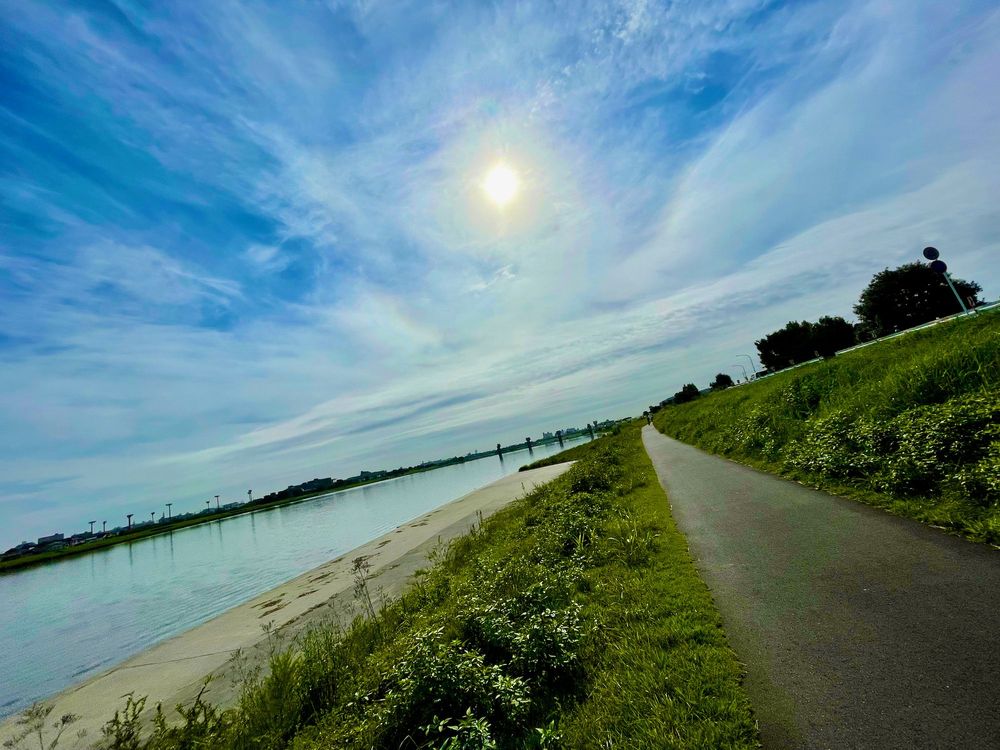 Despite having some early morning meetings, I still managed to eke out a decent 36k ride before diving into a heavy day at the office. Even though it was a much later start than I prefer, I was intent on hitting the tarmac and logging some kilometers. This was the perfect antidote for beginning a very busy day.

I had actually intended to publish this on Wednesday sometime after I completed the ride. Unfortunately work got in the way and I was unable to make time to write. By the time I finished work at 10pm I was spent. No creative juices were flowing, and I was in no shape to even consider writing. I needed to unplug and get some sleep.

This morning the temperature was impeccable, leaning on the cooler side of the spectrum. It felt amazing to be riding in a milder climate similar to Monday. I cannot really remember the last time I walked out of the house and did not struggle to breath thanks to hellaciously thick humidity. It was a glorious morning!

After mounting Red Chameleon and shoving off, the first part of the ride was quite brisk. The cool air swiftly attacking my face actually felt a bit chilly. As I continued to work the pedals and started to exert energy, my body quickly warmed up and the temperature felt wonderful.

Although I did not feel as if I were working exceptionally hard, I was spinning quite nicely and maintaining good pace. I was regularly hitting 30kph on the upstream leg, an exception to a rule sitting right around the 27kph mark. This was pleasing, primarily because of how sporadic my rides have been lately I had low expectations for today's pacing.

I really wanted to do a full 50k but timing was too tight. Rather than heading out at 4:45am like normal, I did not hit the road until closer to 7:30am. Unfortunately I had a number of early morning meetings and could not enjoy a standard dawn ride. However, the upside to this is by the time I left it was an utterly beautiful day. I took a few more pictures than normal because of the allure the sunshine brought to the Tamagawa.

Since I was unable to ride 50k I opted for my standard 36k route. The return trip felt really good, and I often maintained a 32kph-ish pace. There were a few segments where I sustained 34kph for a substantial amount of time. Overall, I was quite pleased with how the entire ride unfolded. I just really wish I had more time and could have completed a 50k instead of the mini-meditative morning ride. Nevertheless, the beautiful weather made the exercise utterly enjoyable.

The past few weeks have resulted in a highly irregular riding schedule. In some cases it was due to inclement weather, others was utter exhaustion, and the result thanks to a heavy workload. Cycling made the beginning of the pandemic manageable, and that has stayed true to this day. However, I can feel my body is unhappy without my having been able to ride with regularity. This needs to change as soon as possible.

In any event, the full timing and pacing for today's ride was decent. While it appeared I was riding faster than normal, when comparing stats from today against the previous 90 days, they were somewhere in the middle. Despite feeling really pleased with the ride, the stats basically are saying same shit, different day.

Next week Monday through Wednesday I will deep in the mountains in Nagago, hiking in Kamikochi. The recent pictures I have seen of the sunrise have been stunning. I am really looking forward to the hike, even if I am a bit concerned about my back being able to withstand a heavy backpack and six hours on the trails. But it should be a ton of fun.

As I sit here on Thursday evening, over 36 hours since I completed this ride, I look outside my window into the darkness. Crickets are singing autumn tunes while the dogs are upstairs arguing about some nonsense. Red Chameleon and I were unable to hit the tarmac this morning due to rain but will hopefully be able to get out on Friday. I need to ride, especially after how many long and crazy hours I have worked this week.

Thankfully I am off all next week, and do not have to worry about work for over 10 consecutive days. We all need to unplug, and I fully intend to do so during vacation. In the meantime it is back to the daily grind for another day. Even before that, I have one final 90 minute meeting tonight, and then it is off to lala land for me.